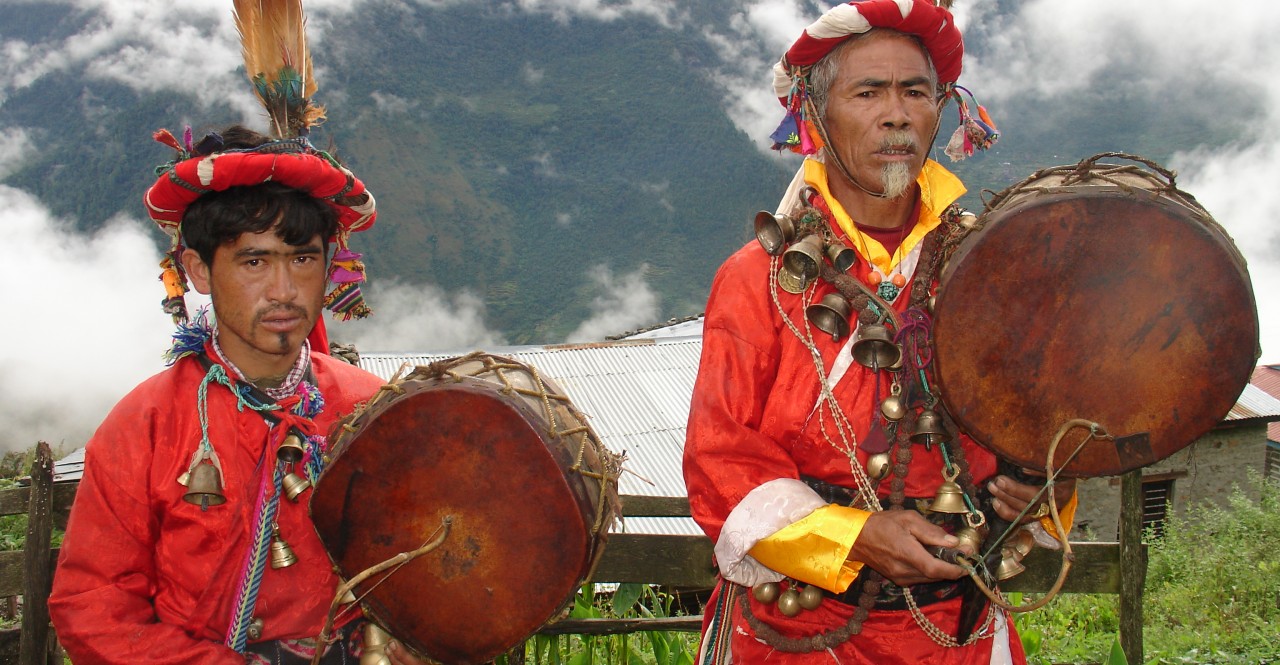 Nepal is a country with many ethnic groups, religions, and traditions ranging from northern Indian Hindu practices to Bon and Tibetan Practices that have existed together in the land for what seems to have been the beginning of time. Among the many practices and rituals, Shamanism has always been a matter of curiosity. It is a healing method, a gateway to the spirit world, and an integral part of the daily life. Snow Leopard Trek has devoted time to discover the different practices related to different communities and we provide our valued guests an opportunity to experience some of the incredible practices in the Nepalese society. We have many trips to different places of Nepal in which you can meet the local shamans and to see, experience, and be a part of their practices of healing and interaction with the world of spirits. 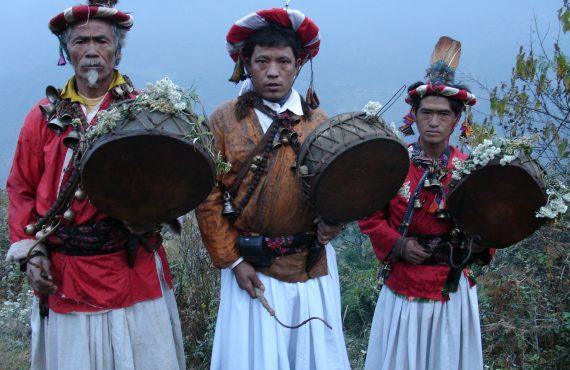 People who practice shamanism try to reach the altered states of consciousness and interact with the beings in the spirit world, which for many is a mere superstition. The practitioner of shamanism are believed to have access to, and influence in the world of benevolent and malevolent spirits. Shamanism in Nepal is practiced with the following set of beliefs:

Shamanism in Nepal is mainly practiced mostly by who have associations with the Tibetan culture ,but there are also pure Hindu practices. Most Tibetans are practicing Buddhists, a religious culture deriving from ancient India. In Tibet, however, this Indian Buddhism has been amalgamated with the ancient indigenous shamanism and pagan animism of that country, thus giving Tibetan Buddhism its unique and especially colorful character. Influences of those Tibetan practices have been widely found in the northern Himalayan region of Nepal and the high hills. The function of Shamanism in the Nepalese society is to please the bad spirits and cure the ill effects caused on humans or animals by such spirits. The therapeutic expert or professional in this regard was the Bonpo shaman-healer who treated and cured not only the diseases of the physical body, but also the illnesses of the soul, in order to bring the psyche of the afflicted individual back from fragmentation and alienation into wholeness and well-being. The shamans are primarily healers in the Nepalese society, but have also have gained popularity as the guide for journey beyond the present life and through perilous Bardo until a human being reaches his/her next life. Since it is believed that Shamans are the masters of alternate states of consciousness, there are many stories and folklore where shamans explore the landscapes of the mind, the collective unconscious psyche, and return with treasures of knowledge and power in order to benefit humanity. 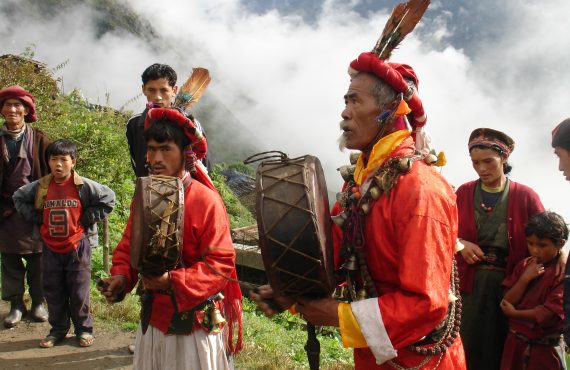 According to the Shamans, the physical and mental problems/disorders are the result of disharmony \in the natural and moral order of the world, as well as from an imbalance and weakening of the personal energy field of the human individual. The shamans perform rituals to balance and bring the order into harmonious interaction. This balance and harmony existed primordially, but has been interrupted and shattered by the thoughtless and sinful actions of mankind. To rediscover and re-establish this lost primordial harmony, all obsessive and negative thinking which blocks the free flow of the energy within the individual must be dissolved. In this way, the individual can come into the realization of his full innate potentiality, manifesting his energy in the world about him without disrupting the natural order of things.

The Newari shamans (Jankri) say that “the way of the shaman is the way of love”. They seek to bring love, harmony and peace to those who suffer from diseases of a spiritual nature. Like most shamans, they recognize that disease can be caused by other, more physical, mechanisms and leave such cases to medical doctors. The shaman’s role is recognized by the community, not claimed by the individual: he is a Jankri only because others are healed by him, not because he says he can heal them.

The primary duties of a Kirat shaman (mangpa) are invoking spirits, remembering his own roots in nature, and putting his actions to the service of the good; such is mundum, the path of the shaman.

Both groups believe that the Path of the Shaman was brought to the world by Shiva, and that people are called, rather than choose, to be shamans. The chosen person may try to avoid the call because he knows it will mean a difficult life; the Jankri have everyday occupations like everyone else, but must make themselves available for healing work at the “transition times” of the day: at daybreak, or just after sundown.

There are many tools and objects that the practitioners of Shaminism use in Nepal. Incense is an important part of every shamanic ritual, and there are many kinds in Nepal, each one appropriate for a different purpose or healing. Jankri also use a wide variety of medicinal plants, such as wormwood, mugwort, cannabis, various datura species, ganoderma, and other mushrooms. Interestingly, in the course of their work, they also consume alcoholic beverages (raksi) without suffering the usual effects. Instead, the shamans neutralize the alcohol and transform it into nectar also known as amrit, the elixir of life, from which they receive their power (healing energy).

Besides the all-important Phurba, many other objects find their way into shamanic rituals such as: denguru (shamans drum); dhunga (stones & crystals); mala-bead necklaces (made from seeds, stones or bones); a chindo or calabash, a vessel made from a gourd; bones; feathers; and so on.

Thangka are beautiful, elaborate, and sometimes frightening drawings, tapestries, or paintings depicting the gods, demons, and spirits in the Other Realities. They are thought to have been inspired originally by shamans and their visions of the spirit worlds. Today the creation of Thangka is a highly sophisticated Nepalese art form- not Tibetan, as is commonly thought.

One of Nepal’s most famous religious places of pilgrimage is the Gosainkund Lake,a grand and picturesque lake situated at an altitude of about 4380 m, surrounded by high mountains on the north and east. Every year during Janai Purnima (Full Moon), thousands of Hindu pilgrims come here for blessings. The large rock in the center of the lake is said to be the remains of a Shiva shrine. Shamans (“Dhami”) come from all over Nepal to the lake, to be there on full moon night. There are lots of dancing and singing ceremonies. This day is considered holy by the shamans, and apprentices or “Jhankris” graduate into full shamans. On this day, you can partake in shaman’s healing and other spiritual practices. Joining the Gosaikund Lake Full Moon festival means that your trek almost becomes like a pilgrimage, watching all the activities done by local people, hindu and buddhist visitors and the Shamans & Jhankris. Our company offers this trek to all our valuable clients.

NOTE:
These itineraries are only a guideline and we can customize it as per your request. You can add rest days in between, ask for an alternate route (if available) and add other destinations like Pokhara and Chitwan if you wish to visit any before or after the trek. We can arrange for trips to Bhutan, Tibet or India upon your request before you travel back to your home country. Practices of Shamanism are only done in the evening or at midnight. Most of the Shamans can’t speak English fluently so the local trek guide will act as the interpreter.

Day 08: Drive from Dunche to Kathmandu by private vehicle (5/6 hours)

After arrival in the International airport at Kathmandu you will be greeted by our representative from Snow Leopard Trek and transfer to hotel.Overnight at hotel.

Early in the morning after breakfast, we pick up you in your Hotel and drive from Kathmandu to Dunche via Trisuli by private vehicle which takes about 6 hours. The road is quite smooth until reaching Trisuli through the terraced fields and Villages and we will have our lunch in there. After lunch, our road is roughly with dust viewing scenic valley until reaching large Tamang settlement of Dunche. We will check in our Langtang National Park Permit near the Dunche. We can see Langtang Lirung and Ganesh Himal from Dunche. After arrive in Dunche, we will visit Tamang Museum. Overnight in Lodge.

In the morning after breakfast, we leave the village and follow the trail passing the terraced fields and cross a small stream by a wooden bridge to the opposite bank. Now the trail becomes steep ascent through the forests and traverse up the cliff like a flank and commanding a view of the rocky mountain of Gosaikund deep in the valley. We are gaining a high elevation each step and will come to a wide flat area. We will have our lunch there. After lunch, we continue again steep ascent on a ridge with Rhododendrons. This steep ascent will be over in a while and join to the path coming from Kyanjin Gompa. After we come to a flank with bare trees and short ascent, we will arrive in Shing Gompa. There is small Cheese Factory and Old Buddhist Monastery which we will visit in the evening. Overnight in Lodge.

Today we are going to Gosaikund Lake, while enjoying the Holy Lake and Himalayan View. We start after breakfast; we follow the trail that gently ascends the mountain flank with bare trees and cross over the ridge. We traverse the flank of the Langtang Khola and going through a forest full of moss and ferns. We follow the flank back to ridge and reach in Chalangpati from where we can see the Langtang Lirung and Ganesh Himal. Then, we follow the wide path that stretches on the high ridge ahead. We are approaching the forest limit and the view opens rapidly with Manaslu, Himal Chuli and Annapurna Himal behind of us. We keep ascending towards prayer flags above and will reach in Lauribinayak where we will have our lunch. After lunch, the wide trail on the ridge continues further even after lauribinayak and the ascent becomes strenuous. We keep climbing towards the rocky mountains of Gosaikund and the ridge becomes a narrow rock ridge until reaching third Lake Gosaikund passing the first Lake Saraswoti Kund and second Lake Bhairav Kund. On the Gosaikund Lake, there is a Shrine in which a lingam symbolizing Shiva is kept and revered. Gosaikund Lake is a site for the great pilgrimage in August each year. Overnight in Lodge.

Full day experience with shamanistic dances and spiritual songs as well as activities of local people and other devotees/pilgrims. Overnight in Lodge.

In the morning after breakfast, we leave the lake and start to descend the rocky mountains of Gosaikund until reaching Lauribinak. We will have our lunch here. After lunch, we keep descending to a ridge until reaching Shing Gompa viewing the spectacular mountains. Overnight in Lodge.

Today, we start out trek after having breakfast. We climb down all the same way back through the Rhododendron forests and terraced fields until reaching Dunche. Overnight in Lodge.

Day 08: Drive from Dunche to Kathmandu by private vehicle (5/6 hours)

The 9 days Nepal Shamanism Tour comes to an end today. There is nothing to do but trade emails with travel companions and organize the photos. If you have more time you can do some shopping or walking around in the streets of your hotel. A representative from Snow Leopard Trek will take you to the airport approximately 3 hours before the scheduled flight. We hope you enjoyed the tour with us, and we are sure you ‘ll be back making another trip somewhere in the Himalaya again.