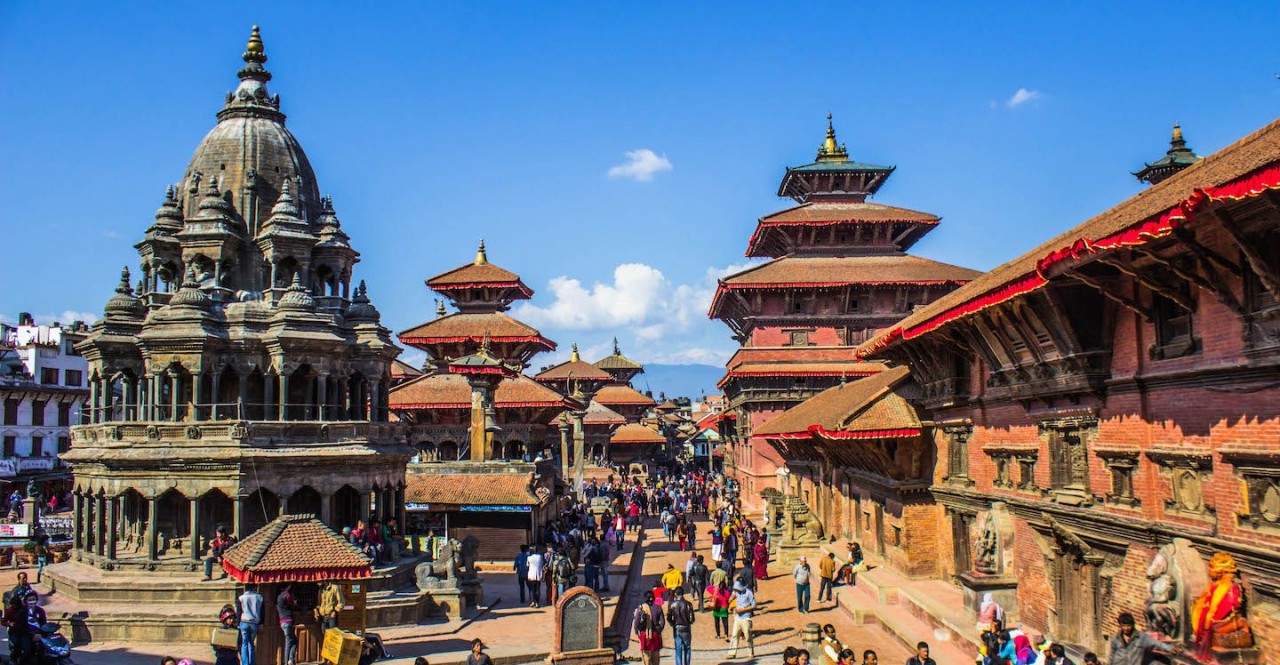 We invite you to join our 10-day Nepal Heritage Tour, which includes a mountain flight over the Himalayan Range to see incredible mountains including Mt. Everest. The tour covers all of Nepal’s Heritage Sites recognized by the UNESCO as the World Heritage Site. We start the tour with an hour’s superb mountain flight over the whole Himalayan Range. The same day, we make a tour of four of Kathmandu’s Heritage Sites -Kathmandu Durbar Square, Pashupatinath, Swayambhu, Boudhanath. The following day, we make a visit to the two medieval cities famous for their arts and architectures – Patan and Bhaktapur.

Next, we drive to Chitwan Jungle and discover why the National Park holds an important place in preserving the wildlife that are rapidly becoming extinct from this planet and therefore recognized by the UNESCO as a World Heritage Site. From Chitwan, we drive further southwest to Buddha’s birthplace of Lumbini – also a World Heritage Site of the world civilization. After exploring Lumbini, we head to the lake city of Pokhara – one of world’s most beautiful valleys. After spending another full day in exploring the natural and cultural grandeur of Pokhara, we return back to Kathmandu.

The 10-day Nepal Heritage Tour with Mt. Everest Flight has been designed to cover all of World Heritage Sites in Nepal and at the same time enriching the tour with some fun filled activities such as mountain flight, jungle tour, boat riding, etc. Depending upon the time you can spend for your Nepal trip, you may also find it interesting to check out our other tour packages.

Upon your arrival in the Kathmandu airport (TIA) you will be greeted by a representative from Snow Leopard Trek. After completing your custom formalities (Visa, etc) pick up your luggage and look for our representative with a Snow Leopard Trek display board at the arrival gate. You will be then transferred to hotel. After check in, you can take a rest, hang around in the city, or visit our office – it all depends upon your interests and condition.Overnight at Kathmandu.

Today, we take an hour’s mountain flight in the morning. Mountain flights are done daily by various domestic airlines, taking-off from Kathmandu airport offering an unparalleled panoramic views of the Himalayas taking you within camera range of the highest peaks in the world. After the mountain flight, we start a guided tour to four of UNESCO World Heritage Sites in Kathmandu. Kathmandu Durbar Square holds the palaces of the medieval Kings who ruled over the then Kathmandu Kingdom. Pashupatinath houses a sacred lingum, or the phallic symbol of Lord Shiva. The Aryaghat alongside Pashupati and on the banks of the Bagmati River is a famous funeral site for the Hindus. The Buddhists shrine of Boudhanath is one of the largest stupas in the world, and one of the holiest Buddhist pilgrimage and tourist destinations in Kathmandu. The area of Boudhnath is also famous for over 50 Tibetan Gompas or monasteries. Swayambhu meaning the “the self-existent” is popular among the foreigners as the Monkey Temple owing to the large number of monkey population residing in the area. Overnight at Kathmandu.

We start our tour of two more UNESCO World Heritage Site cities adjacent to Kathmandu: Patan & Bhaktapur. Patan is also known as The City of Fine Arts. Patan Durbar Square is one of the places in the Kathmandu Valley where the medieval arts and architecture still remain in its original state. The Durbar Square is full of ancient places, temples and shrines, noted for their exquisite carvings, mostly the Hindu and Buddhist monuments. Similarly, the medieval town of Bhaktapur, or the Town of the Devotees, preserves medieval arts, architecture, culture, and lifestyle to this date. One is sure to feel like travelling back into the past while walking along the Bhaktapur thoroughfares, squares and streets. Overnight at Kathmandu.

Today we take an early morning breakfast and drive to Chitwan, 150 kilometers from Kathmandu and a 5 hour’s drive into the mountains. All the way we descend down along the winding road on the banks of the Trishuli River. After checking in to the hotel and getting refreshed you will be briefed about full nature programs by our nature guide. Then we head on for activities. There will be a guided village walk and a walk on the banks of the Rapti River to watch the charming sunset views in the sub-tropical jungle. In the evening, dinner with cultural program by ethnic tribal people with their stick dance and tribal drums. Overnight at Chitwan.

The Chitwan National Park has been declared by the UNESCO as a World Heritage Site. Today you will discover why the National Park holds an important place in preserving the wild lives that are rapidly getting extinct from this planet. You’re almost sure to spot water buffalo, egrets, woodpecker, and deer in their natural habitat. The Park is also home to rhinoceros, tigers, leopards, sloth bears, wild bison, gangetic dolphin, 500 birds, butterflies, as well as the near extinct Gharials crocodiles. You can do a number of activities here – an elephant safari, a nature walk, bird watching, a jungle drive or a canoe trip. You may even take a bath with an elephant and learn how to wash your elephant! Don’t forget take a video of your elephant-bath which will be one of the fondest memories of the lifetime. Overnight at Chitwan.

After enjoying bird watching or jungle safari in the morning today, we drive to Lumbini another World Heritage Site about 190 kilometers from Chitwan and a 4 hour’s drive further south-west. Lumbini is not only the most important Buddhist pilgrimage site the place where Buddha was born but it’s also an important architectural and historical site of the world civilization. Reaching Lumbini, we explore some of the major landmarks and monuments in Lumbini such as: Mayadevi Temple the exact site where Buddha was born, Ashoka’s Pillar, erected by Emperor Ashoka (249 BC), and various other temples & monasteries founded by the devotees from different countries: Tibetan, Chinese, Japanese and Burmese, Korean, etc. Overnight at Lumbini.

We drive to Pokhara today about 290 kilometers north-east from Pokhara which takes for about 6-7 hours. The drive is very much on the same road we came by till we reach Mugling. From Mugling, we drive further west into the mountains, following the rivers for much of the day. Pokhara, also nicknamed as the Lake City, is not only Nepal’s but one of the most beautiful places on earth. The town offers magnificent views of Dhaulagiri, Manaslu, Machhapuchhare, five peaks of Annapurna and others. Pokhara is also the gateway for trekking in the Annapurna Region. After arriving Pokhara, we make a sightseeing trip to some of Pokhara’s marketplaces, old bazaars, and landmarks. In the evening, explore the surrounding lakeside areas. Overnight at Pokhara.

We spend a full day to explore Pokhara. Early morning we drive to the Sarangkot Hill to have the sunrise views over the Himalayas. After breakfast, we make a full day sightseeing of Pokhara. Enjoy walking along the bank of Phewa Lake, admiring the stunning reflection of the Fish Tail Peak in the blue Phewa Lake waters. We also take a boat around the Phewa Lake which is the second biggest lake of Nepal. We take the boat across the lake and take an hour’s walk to the World Peace Pagoda. We also make a short visit to the Gupteshwar Gufa Cave (also called Shiva Gufa). Some of the other places that we visit today include the Seti River Gorge, Devi’s Fall and the mountain museum etc. Overnight at Pokhara.

After breakfast, we start our 200 kilometers drive back to Kathmandu. Better to hold on the left pane of the vehicle to enjoy the scenery through the route. Upon arrival in Kathmandu, you will be transferred to your hotel. There is nothing to do but trade emails with travel companions and organize the photos.Overnight at Kathmandu.

You are saying good bye to the mountains as your tour in Nepal comes to an end today! We hope you enjoyed the tour with us, and we are sure you will be back for a trip to Himalaya again. Approximately 3 hours before your scheduled flight a representative from Snow Leopard Trek will transfer you to the airport. On your way home you’ll have plenty of time to plan your next adventure in the wonderful country of Nepal.